In our VisualARQ blog, we usually talk about free-form architectural design with Rhino. What does “free-form” mean to you? Freedom to express yourself? Not sticking to conventions? Letting yourself go with the pleasure of drawing? In that case, believe it or not, you have many things in common with a group with which you may not feel identified: Harley Davidson bikers. They also love freedom, they show their freedom of expression by customizing their beloved motorcycles, they reveal their unconventionality through their dress code and appearance, and they let themselves be carried along by the route. That’s their world. They ride sitting upright with their hands on the handlebars, touring the world’s roads. 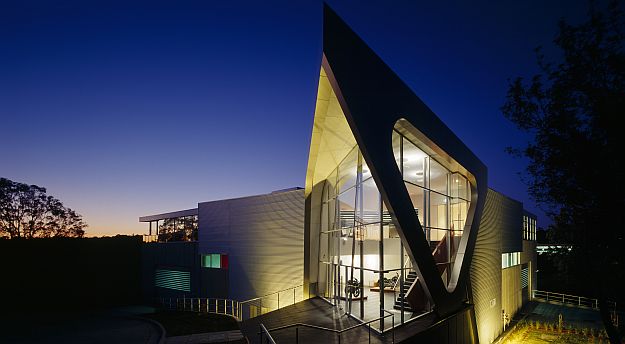 Harley Davidson is a brand that was born in 1903, more than a century ago, with a long history and many contrasts. In World War II they were military suppliers and, in the 1960s, they became a symbol of the counterculture. Riding a Harley is a lifestyle. This is the personality that the Australian architect Tony Owen wanted to imprint on the Harley Davidson Australian Headquarters building. An architectural jury awarded this work with the Asia Pacific Property Prize, but only a bike passionate could tell whether the brand spirit has been properly captured or not. Adopt the role you prefer and join us to Sydney. The Harley Davidson building is a landmark in Sydney Lane Cove Business Park. An architectural icon may just become an aesthetic reference, but this specific building goes far beyond this. We are interested in approaching the way in which Tony Owen studio has represented the concepts of movement and freedom with which the brand is associated. To achieve this, he has worked both on the interior and exterior of a built area of 2,200 m2 out of a total of 5,000 m2.

Free form is one of the features of current architecture; VisualARQ, as a Rhino plug-in, allows free-form design. Image: Tony Owen Architects

The building’s exterior is inspired by the concepts of movement, dynamism and aerodynamics. Although it does not replicate any motorcycle element, its elegant design can be related to motorcycles forks and frames. Innovation in contemporary architecture goes hand in hand with parametric design and with the ability to instantly visualize the results in 3D thanks to the right software. Without these tools, architects wouldn’t take daring design decisions. 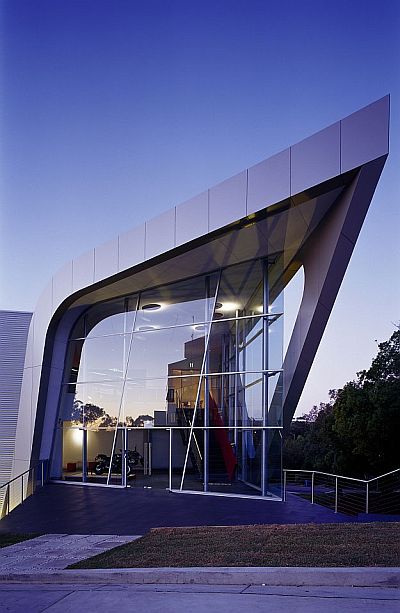 Parametric design in architecture is made possible by innovations in software. Image: Tony Owen Architects

The triangular structure outside is probably the most personal feature of the building. However complex a geometry may be, with VisualARQ you can generate plan views, elevations or sections, besides other common architectural elements, of course. As for the building’s interior, there are more elements than those one can normally find in a company. Obviously, there is an administrative area, as well as a café. Then, being Harley Davidson a bike brand, we can find an exhibition area, workshops and warehouses. However, and what is most unusual for this type of business, the company has also incorporated quite uncommon elements – except for new technology companies and the like – such as a library or a gym, placing them in the foreground. 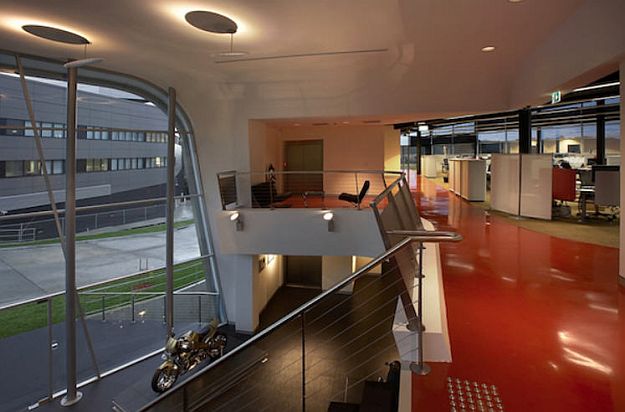 From the mezzanine, you can see all the services available in the facilities. Image: Tony Owen Architects

If you want to convey the idea that a brand represents a lifestyle, its headquarters should express it too. For this reason, the first things you find when you arrive are not the administrative or technical departments, but the ones that could be considered recreational or break-out areas. The entrance leads to a mezzanine from which you get an overview of these activities areas, as well as of the technical workshops and training area. The idea you grasp is not that you are visiting the headquarters of a motorcycle supplier, but rather those of an experiences supplier. Being this project inspired by freedom of movement, especially the building’s exterior, Tony Owen Architects have opted for the architectural software Rhino. The studio has emphasized that 3D modeling provides an enormous ease of experimentation with complex geometry and infinite spatial combinations. When you design individually all parts of a project, you can compare the variations of forces according to the modifications and anticipate how the structure will interact with the metal cladding. Rhino allows to create highly imaginative designs that require technical complexity, without surprises and sharing information with all the experts involved. 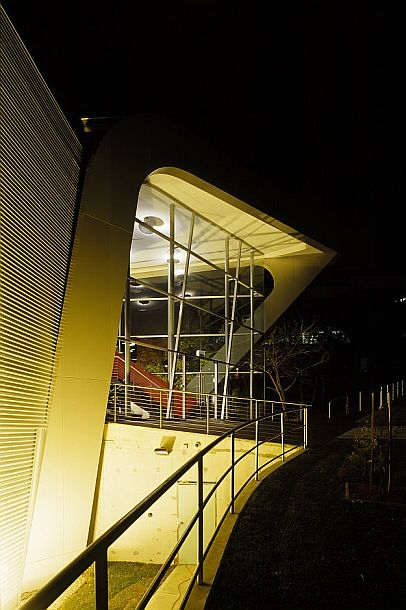 For some time now, Australia has become an example of magnificent contemporary architecture. Many interesting projects are being carried out and several of them are by Tony Owen. Tony is a young architect who graduated with honors at the University of New South Wales (he was awarded the UNSW University Medal and the Board of Architects Prize for top graduate) and studied at Columbia University in New York, where he won the BHP Student Biennale National Design Prize twice. After working for several studios, such as Richard Meier & Partners, Skidmore, Owings and Merrill, PTW Architects and SJB Architects, in 2005 he founded his own company. We don’t know if it was his youth that made him instill the spirit of rock into this renowned brand Sydney headquarters, but he has certainly managed to make the building emanate a sense of dynamism. Freedom of design with Rhino. Freedom of movement with Harley Davidson. From paper and screen to the road. Bikers say that four wheels move the body and two wheels move the soul. May architecture move your passions! 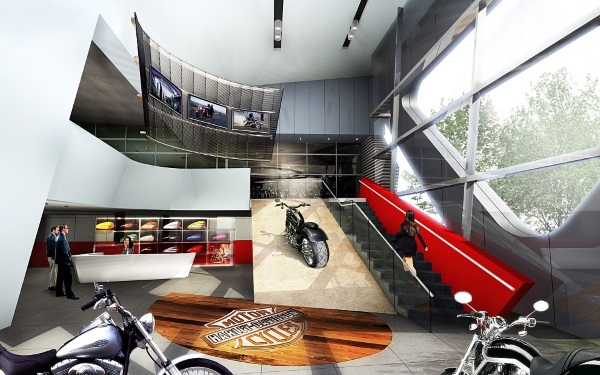 Embark on your own journey with Rhino and share it with us on Facebook. (Article by M.A. Núñez)