You decide to take a break from work or study. A break from drawings, calculations and projects. You are overwhelmed or bored or tired. You decide to watch a movie, you choose one with good reviews. If that script won the Oscar, the Golden Globe and the Critics’ Choice Movie Awards, it must be interesting. You like the director, the actors are popular and everything looks ok. It cannot fail you in your evasion from the worktable. Suddenly, in the middle of the movie, you start worrying. You are worse than you thought. You are seeing NURBS surfaces everywhere, surrounding the characters. Maybe you do not need a movie but a rest home. Her (2013) movie by Spike Jonze (scenes inside the ZeBar designed by 3GATTI) from 3GATTI on Vimeo. After a while, NURBS curves are gone. The story goes back to normality. Actually, the story is not so normal, but you find it plausible. After all, you are in love with your mobile. Take it easy. It wasn’t a hallucination. Director Spike Jonze chose the Shanghai Zebar for the Her scene in which Joaquim Phoenix meets Olivia Wilde (yes, she starred in Dr. House). And if there is anything that characterizes the Zebar, these are its walls (walls?) in the form of ribs, which also remind of a zebra. Zebar. Francesco Gatti is an Italian architect whose studio (3Gatti studio) has offices in Rome and Shanghai. In the latter city, he received a commission from an ex Chinese musician and a film director from Singapore. They had decided to open a live bar, with a restaurant area, a live music stage area and a lounge area. He had many ideas, but the budget was limited. Gatti was lucky with his first proposal. He presented an approach based on 3D modeling and its possibilities of experimenting with multiple variations and freely creating all kinds of shapes. 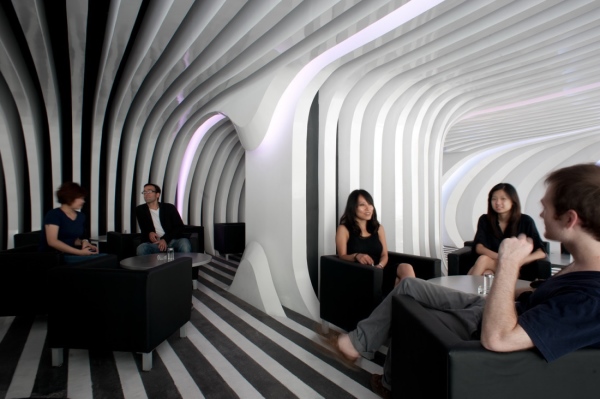 The live bar would be similar to a cave, formed by the digital Boolean subtraction of hundreds of slices from an amorphous mass. The walls of that cave, being fragmented and placed perpendicularly, would allow outwards views. A cave with a view. When it came to NURBS, the choice was Rhino. The software agility allowed to quickly obtain plans and designs and permitted fast material manipulation. In just two months, the live bar was built. The basic shape of the space resembles a Z. Don’t forget that we are in the “Z”ebar. Shapes are soft and wavy, crossed by the openings formed by the wood sheets. The bar stands in the center of the space, slightly elevated, as the customers confluence point. At one end, there is the stage for musical performances. At the other, a dancing area. In a place with traditional walls, the interest would be awakened by the decoration. Here, the architectural design establishes a distinctive atmosphere and creates itself a peculiar play of lights and shadows. Not only the plant of the venue plays with the relationship between Zebra and Zebar. Colors are also involved, the panels are white and the blackground is black. A concert at this place transports our senses to another world. Rhino is an ideal software to produce a design of this kind. Based on a few simple elements, it creates a unique environment. The orderly succession of slices creates an intimate but permeable space at the same time. 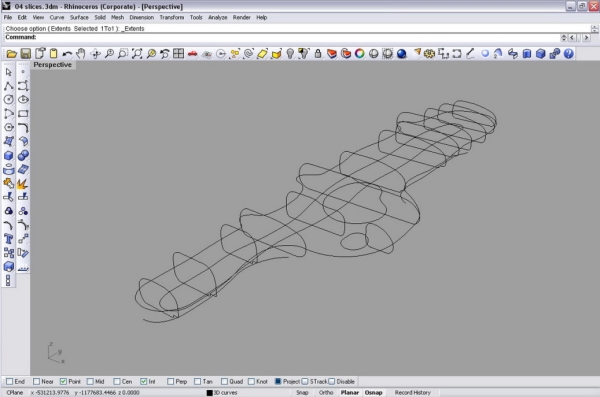 The author has highlighted the economic and social characteristics of the construction process of this project in China. In another country, he would have delivered the digital model to a manufacturer with a numeric control machine to have the pieces cut, a fast system like the one we mentioned when we talked about the “third dimension” at the University of Singapore. Instead, in this case, they used a system whereby the sections were projected on plasterboard and cut by hand. Due to the low wages of labor, the cost was very low. The club was built within two months but, to their surprise, the architects discovered that the promoters had not even made a business plan and did not know how to implement their projects. A fast design and constructive process without delays were postponed by the lack of a clear business plan, which caused a delay of 3 years in the inauguration of the bar. 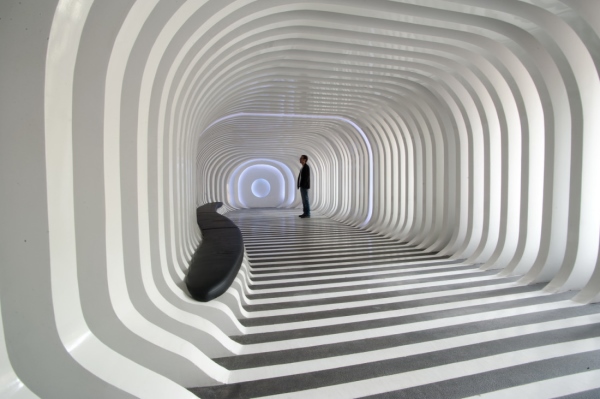 The Zebar original and futuristic design appears in some scenes of an equally original and futuristic story: a man in love with an operating system called “Her”. This can be better understood if we consider that “Her” voice is Scarlett Johansson’s voice. If the intriguing NURBS surfaces of this project has sparked your interest, check out the Rest Hole project, a rest area built where there used to be a parking lot, below the Seoul University students dormitory. 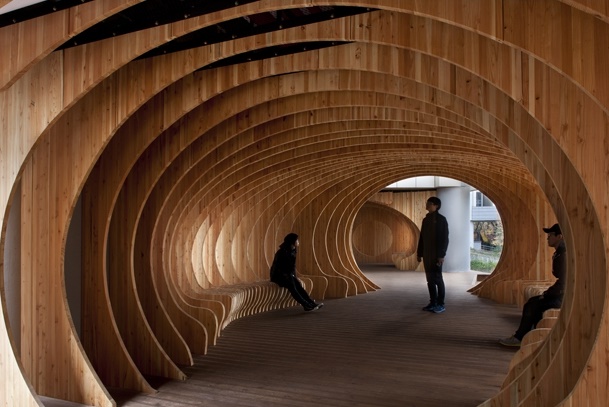 Some architecture students decided to transform this dark and bare space, delimited by the columns that supported the building, into something more useful and interesting: a crossing place that could also act as a rest area. Together with the UTAA studio, they created a modern and functional space. They started from an empty and inhospitable space that was radically transformed by placing wooden panels all around it. The spacing between the panels lets light and air come through. The design organic forms and the material lightness create a relaxing retreat. The initial idea was to use wood sheets and cover them with plywood to create the sinuous curves. This material was discarded and replaced by engineered larch wood: Glulam (Glued laminated timber). At first, it was not easy to find a factory in Korea with experience in transforming this material into curved plates, but finally they managed to find a furniture designer who had experience with computerized cutting machines. Each of the 500 35mm thick glulam panels was cut with a unique design and was ready to be placed around the parking lot perimeter. The direction of the sheet waves varies according to the different areas: at some points they allow for transit, at others they generate small rooms where to have a rest. The panels which had to serve as walls or ceilings were placed with a spacing of 450 mm. At some points, rest areas were created with seats shaped by the walls themselves. In these areas, the sheets were placed with a smaller spacing (only 90 mm), so that they proved comfortable to sit on. 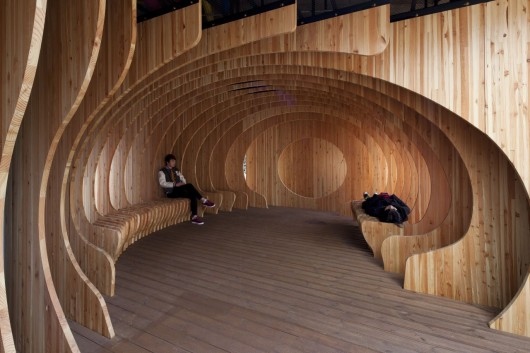 The ribs surrounding the space are sinuous and, with the uniqueness of each panel, create a unique perspective from every angle. This project has also been developed with Rhino, with a special emphasis on the “Contour” command, which allows creating parallel slices from a given volume. This command has been fundamental for the generation of the transversal ribs. 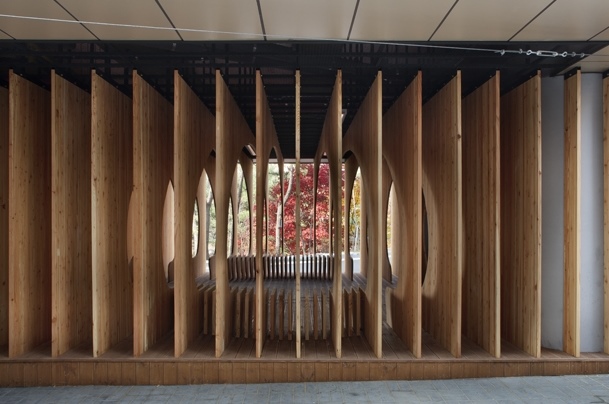 Both in the Zebar and the Rest Hole cosy spaces have been created that recall the wooden ribs of some unknown animal. Among the stories and legends which are being narrated there, perhaps there is also that of Jonah, who spent 3 days in the belly of a whale. A real one, not a wooden one. 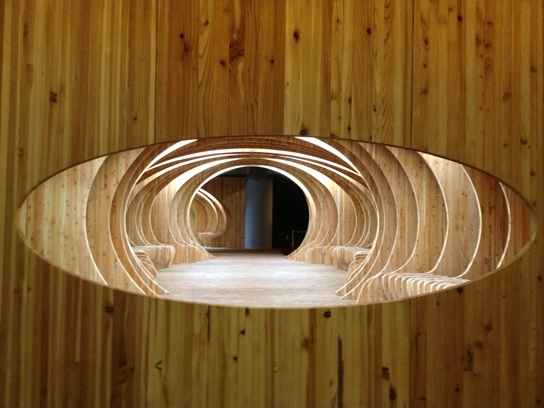