Investing in BIM: afraid of being unprofitable? 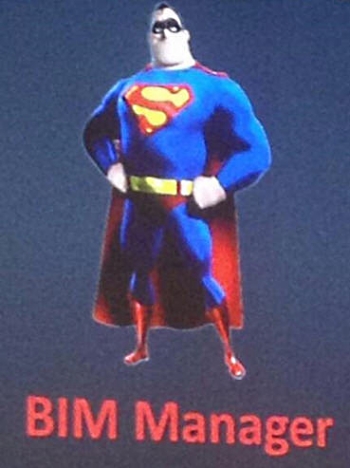 At VisualARQ, as creators of an architectural software incorporating the IFC format that can be integrated into any BIM software, we are following the take-off of this technology around the world. In our blog, we have already analyzed the effects of the European Parliament initiative to promote the adoption of Building Information Modeling (BIM) in member countries. At the beginning of 2014, this institution also voted for the requirement of BIM in public works tenders. This measure is primarily aimed at cost saving in all phases of the construction process. Economic revitalization is equally important, since it enables small and medium-sized companies to enter public tenders by accessing fragments of large projects. BIM allows you to break down large contracts without compromising the reliability of its completion.

The legislation aims to encourage the adoption of BIM because the market, by itself, is a little bit reluctant to it. We could consider two reasons for this attitude. The first reason are suspicions when it comes to sharing information. A BIM system is transparent and requires that the data are put together. There are no “secrets” and that arouses fear in the business field. From a personal point of view, consciously or not, we have already taken the step. Data dissemination through the Internet and the use of cloud storage systems have burst into our lives and there seems to be no turning back. From keeping our papers locked in our desks drawers, we now place them in a sort of information limbo which is accessible from anywhere. And we share them. From a professional perspective, we don’t have the same vision: the paradigm shift of sharing to grow, integrated in a true collaborative environment, requires an effort. Working in groups is not the same as working as a team. And BIM aims at collaboration, not at coexistence. 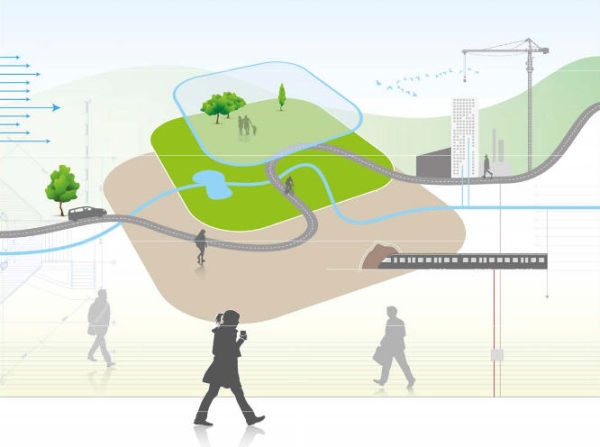 The second reason for reluctance to BIM is more prosaic and less philosophical: figures. The second factor that may cause resistance to the adoption of this system is the fear that the investment could prove non-profitable. We are talking about investment in purchases, in the recruitment of qualified personnel or in training time. Large companies play in another league, and generally adopt innovations of all kinds as soon as they arise. Smaller size companies have to reflect about it carefully and ask themselves if their financial and personal investment in BIM will be profitable. At the end of 2013, McGraw Hill performed a study on the BIM experience in several continents. The degree of BIM penetration is very different in each of them, as well as the time elapsed since its adoption. However, it is a good indication of the satisfaction with the investment. The American continent is represented by Canada, the United States and Brazil. In Europe, ratings by Germany, France and the United Kingdom have been collected. Asian countries included in the study are South Korea and Japan. Australia and New Zealand complete a list of ten countries. Among all these, the United States has contributed with the largest number of respondents. In order not to let this fact entail deviations from the overall results, we will analyze them on a per-country basis. This will allow us to see the level of satisfaction and, what is more relevant, consider the time of use of BIM technology, from which we can deduce the necessary time to obtain positive results. McGraw Hill study specifically acknowledges that among the participants there is no common system to calculate the ROI, the return on investment. However, there is consensus on the benefit they get from their investment in terms of MONEY, TIME and EFFORT: purchasing hardware and software, training users and giving shape to work processes. One-third of the companies do not use specific tools to measure the return on investment of BIM, so we mostly talk about perceptions.

This is the result of investment in BIM 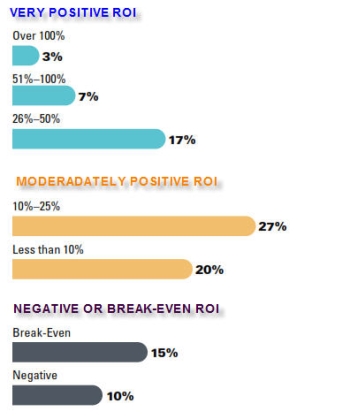 Contractors’ rating of the BIM ROI

The very positive evaluation of ROI implies that the investment is considered to have been successful and the profitability very satisfactory. 27% of users fall in this category. 47% of users are somewhat less optimistic and believe that they do get a benefit, but that this does not exceed 25% of the investment. 15% of users believe that they have covered the investment but have not yet obtained net profit on it. Finally, 10% of users say that they did not obtain a return on their investment, but it is unclear if this is due to lack of experience and skills, to recent implementation or other factors. 74% of contractors are satisfied, to a greater or lesser extent, of the time, effort and money they have dedicated to BIM. These are the overall figures but variations by country are remarkable. They come from the engagement in the use of BIM, the extent of use in each country and the type of projects in which it is used. The list of the contractors who are most satisfied with their investment is led by Germany, France and Japan. In these countries, 97% of respondents claim to have benefited out of their investment in BIM. Showing also very positive figures, but at a reasonable distance, follow Canada and Brazil, with similar percentages of 87% and 85% respectively. The next section is occupied by Australia, New Zealand and the United States. The latter is the country where the surveyed sample is broader. There, 74% are satisfied with what they get from their investment in BIM – remarkable, but quite distant from the countries that top the list. Finally, at a huge distance, we find the United Kingdom and South Korea. One of the possible causes is that in South Korea the use of BIM in commercial buildings (hotels, retail, shops…) is lower than in other countries. The type of project where BIM is used is a variable to be taken into account. We will discuss it in another post. 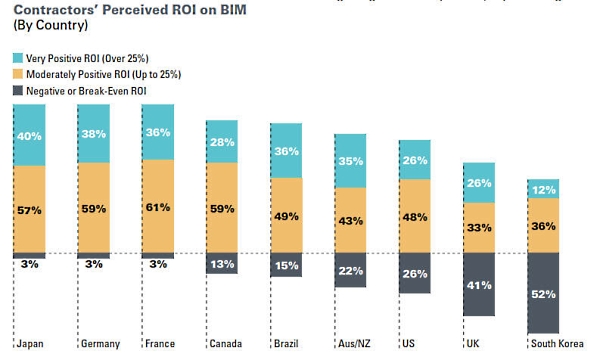 Other aspects of the study unequivocally reveal that the payback is logically not immediate. It occurs after a period of time which cannot be set uniformly, since small businesses need a longer period to absorb costs. It is not only a matter of time but also of the degree of engagement in the use of BIM. The benefit is exponential – the more time and projects, the higher return on investment. The results may come slowly but, once the path is started, the gains make BIM an essential business cornerstone. This is not a theory, it is evidenced by the fact that, even in geographical zones with very different values, the average of the return on investment has skyrocketed in the past 3 years. In Europe, the study carried out in Germany and France offers very positive values that are hampered by the much worse ones by the United Kingdom. Even so, the average acceptance in this geographical area is 84%, while just 3 years ago it was only 40%. The construction business is becoming more and more global (which sector is not?). BIM is not only an official recommendation or a legal requirement, it is a way to improve costs, reduce deadlines, avoid errors, compete in large projects and qualify for international markets.

BIM is not a key, it is THE key that opens these doors.

We at VisualARQ continue the evolution of the architectural design and the construction sector. We will keep you informed through our blog and our communities on Facebook, Twitter, Youtube or Linkedin. Join us and share your experiences. We are your platform. Statistics source: McGraw Hill Construction (2014) (Article by M.A. Núñez)