Can I extract the faces or edges of VisualARQ objects?

Since VisualARQ objects are actually blocks, some Rhino commands don’t apply directly on them, in the same way they don’t work on Rhino blocks directly. This happens with the _DupBorder

, do work on VisualARQ objects (although edges are not highlighted after the selection).

For those that do not work, there is a workaround to sort this problem out. 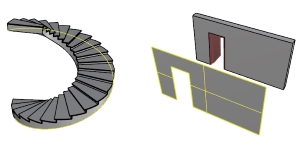