Architecture and sport: a stadium for the new gladiators

Let’s get frivolous. It’s about time, since our latest analyses of architectural projects focused on plenty of cultural equipments, such as schools, big museums , small museums, public libraries, university pavilions, exhibitions, interviews with architects… Today we bring out our most primitive instincts. Let’s go to football!

We have to come to terms with the fact that a sporting event brings together more assistants than ever will attend, for example, a library. Sports facilities are enjoyed by thousands of people who tend to visit them on a more regular basis than people who usually go to a library. And they do so in a very different mood from the one arising from a visit to an exhibition or a garden. Great joys and intense disappointments are lived in a sports stadium, with applauses, shouts, chants and jumps. Few public places allow us to unleash our emotions in such a vibrant and visible way. It doesn’t matter if you were born in a decent culture where passions are not externalized: as you walk into a stadium, your hidden personality emerges, the one you hide from your colleagues and neighbors, and that you will disown in other circles. The euphoria or the sadness that you feel when leaving a sport match will be long remembered, so the setting matters. A lot. It can be your second home or hell.

Specialized sports architects like Populous can make your visit to the stadium worthwhile, even if your team loses. They have extensive experience in such facilities, since they have been working on several sports facilities projects in France, England, USA, Mexico, Brazil, New Zealand, Australia, South Africa, China, Hong Kong or the Sochi Olympic Games, among others. When it was decided that the Dublin Lansdowne Road Stadium – the world’s oldest international stadium still in use, built in 1872 to hold rugby matches – should be demolished, Populous was chosen to build its replacement: the Aviva Stadium. Where before there were 23.000 seats, they had to build 50.000. Where before there was a stadium surrounded by houses, streets, riverbank walkways and a train line, they had to build a stadium surrounded by the same houses, streets, walkways and train line. The site had many limitations and the project should conform to them in a glove-like fit. 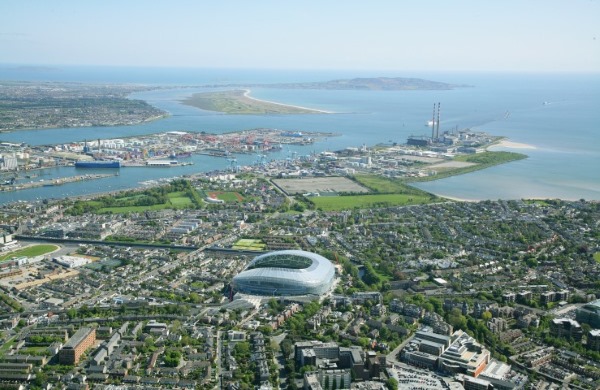 The urban location of the Aviva Stadium influenced its design and construction. Image Populous

The location influenced the design, not the other way round. However, some changes in the surrounding area were introduced, as a concourse in the train station, the construction of a tunnel in the vicinity of the stadium and improvements in the riverbank to prevent flooding. This work was done in collaboration with Scott Tallon Walker Architects, a studio that carries out architectural projects in all areas. The urban setting location required construction works to cause the lower possible damage. The design phase was particularly complex and involved the collaboration of Buro Happold. The software used in the first place was Rhino: its features lead to the most appropriate architectural decisions because it allows to play with all imaginable variations. The combinations of arcs and lines generating different forms in the building envelope geometry were the starting point: from the beginning, the authors wanted the envelope to be the key on which later to develop the construction structure and details. 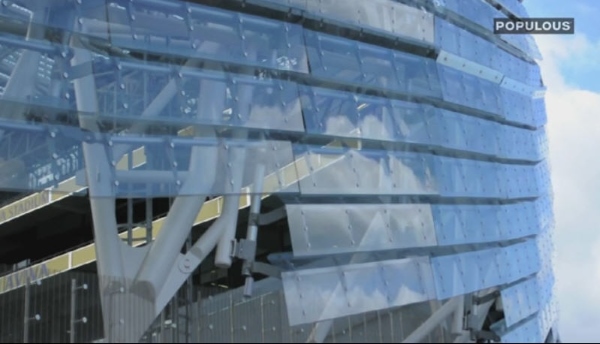 Rhino software was used for the architectural design of the façade. Image Populous

A building like this could have been created without a parametric design but, since we can now work with this knowledge, they took advantages of its benefits. All the variations reflected in the overall design and provided multiple perspectives with valuable information for all participants in the project. This way of working reduces errors and leads to time saving, as well as lower costs. Along with other technological tools, 3D models and parametric studies were developed and shared by architects, structural engineers and contractors. All them could work on the same model, but separately.

The chosen shape is common in the United States, but not so much in Europe: the horseshoe. The houses next to the Aviva Stadium should not be deprived of light, so in the South and, above all, in the North, the height is lower. This also results in reducing the visual impact, to which the rounded shape of the outside also collaborates. The architects have defined the shape as a large crystal bowl. It occupies an area of 66.460 m2 and the field dimensions are 106 m x 68 m. The focus is on the enveloping shape: thanks to external cladding, both the outer walls and the roof form a continuous surface, without visual separation between them. It is especially stunning, since the roof is only supported by two huge columns which are in the northern end, so that it seems that it is suspended in the air over the spectators.

The spectacular stadium roof seems to be suspended over the spectators. Image Populous.

The metal frame of the horseshoe is supported by both columns and by spur-trusses resting on the ring that runs along the perimeter of the stadium. The steel structure of the roof weighs 150 kg/ m2 and its height reaches 48 m from the pitch area, 190 m in the North and South sides and 203 m in the tiers located in the East and West sides. The outer coating consists of sheets made of two types of polycarbonate, with different degrees of transparency. From the inside, they let the light in; viewed from the outside, they reflect the sky colors variations. The façade has 19.000 m2 and a total of 4.000 panels with several different rotations, which are fastened to the façade by aluminium brackets. The parametric models we mentioned before were of great help in this process. 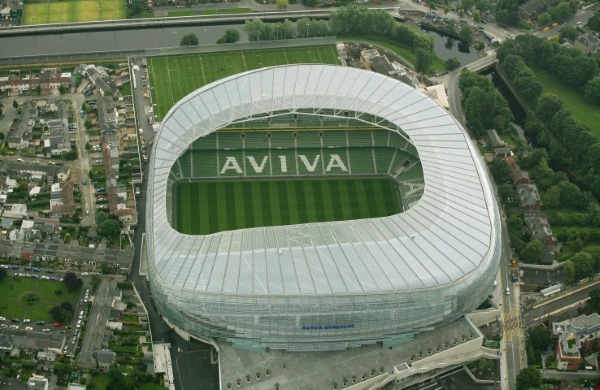 From the aerial view, you can see the enveloping shape of the cover. Image Populous.

The building structures and metal furnishing have been galvanized to facilitate maintenance and ensure its longevity. The visibility from any seat is optimal and unhindered. Whenever possible, the stands are separated from the outer cover to allow circulation. The north tiers has only one level, since there the height is lower. The rest of tiers have up to five floors. All levels are visually unified by the concrete frames and the metal structures painted in gray. The rest depends on the category of the ticket as you, sports spectators, know. The general admission area, with more affordable prices, is located in the first and fifth floors. These floors are open and the resistant building materials – concrete and galvanized steel – are visible. The orange resin floors are a visual parallel with the brick of the surrounding houses. Bars and food stalls have been given a street-like look in their layout and design. 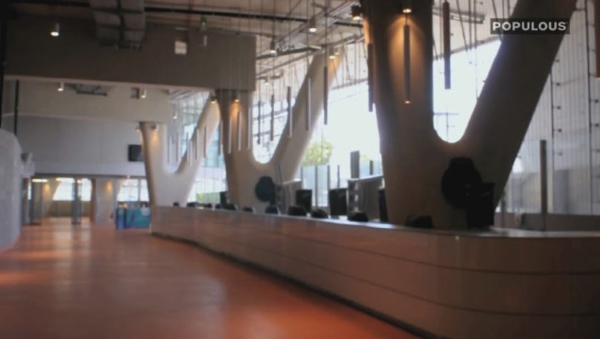 The second, third and fourth floors are closed, since they are the selected areas which can be accessed at most expensive rates. The best views come from the third floor, since both the surroundings of the Aviva Stadium and the playfield can be seen. Another advantage of this level is the double height space on the East and West sides. The reserved area occupies the entire southern tier and contains 36 corporate boxes and a restaurant for 650 dinner guests. In the third and fourth floors, besides great views, you can enjoy a carefully designed interior, where natural materials have been used: stone for the counter bar, gray walls and oak paneling. The finishing touches are even more sophisticated in the corporate boxes. The building complies with the BS 8901 “Specification for a Sustainability Management System for Events” environmental certification requirements and various measures have been taken to make it a sustainable building. 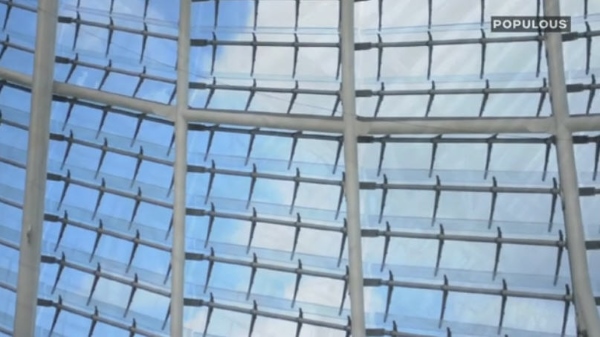 The façade is covered with 4.000 polycarbonate panels. Image Populous.

The design took into account the efficiency of the steel and concrete structure to reduce its weight. The amount of concrete used was reduced by mixing blast-furnace slag. Part of the surface soil left after demolishing the old stadium was reused. The design of the roof collects rainwater for storage in the basement until it’s needed to water the field’s grass. The residual heat from the generators is used to heat water in toilets and kitchens. The transparent covering of the building lets natural light in and, therefore, reduces the need for artificial lighting. Nothing can be done to avoid the deafening noise caused by supporters but, as far as architecture is concerned, acoustic panels have been employed and the ventilation systems generate little noise. As for the monitoring of electricity consumption, escalators only work if they detect that there are people using them and some areas are only lit if there is public there. This design has received several awards: the Emirates Glass LEAF Award, the British Construction Industry Award’s to the Best International Project, the British Expertise International Award in the category of “Sport, Leisure and Tourism”, the Europe Africa Property Award in Leisure Hospitality Architecture, the Green Building Award and the RIBA Award.

Detail of the external structure and cover panels. Image Populous.

We wish to highlight the first prize of the ONCE Foundation that values accessibility for people with disabilities. This is an aspect that is still not considered in many architectural projects and is a pending issue. The Aviva Stadium has taken into account both the users of wheelchairs and those who have visual or hearing impairments. Wheelchairs have some special routes so that they can move safely. At all levels and tiers there are seats reserved for persons with disabilities and those who need it can listen to the radio channel of the stadium on the radio receivers provided by the organization. 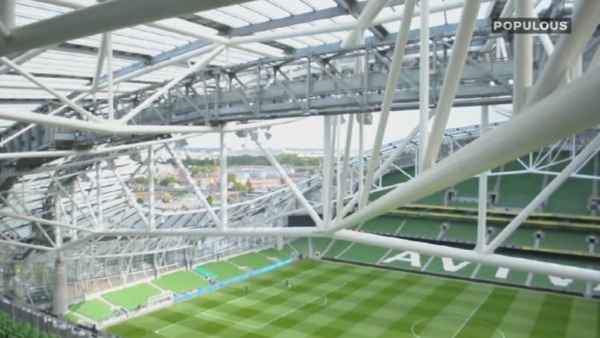 The current Populous studio, formerly known as HOK Sport, specializes in sports facilities and stadiums as Aviva. It was born 30 years ago in Kansas (United States) and currently has 13 offices in England, India, Australia, Singapore and Taiwan. It may seem that a specialization in sports does not offer a wide range of professional achievement but the list of projects that they have carried out is impressive. The Aviva Stadium fully responds to Populous’ motto: Drawing People Together, Sports Architects. Much of the pleasure that those attending sporting events get derives indeed from the fact of being together, sharing the same space and reinforcing a sense of community, which they don’t perceive when they watch a game on a screen at home. Architecture and the spirit of the tribe. Architecture at the service of community. 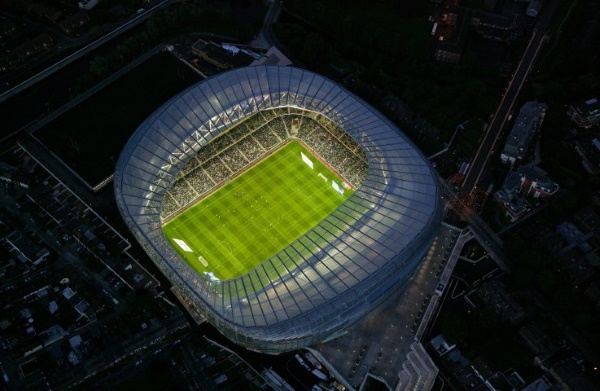 The Aviva Stadium in Ireland: a Rhino design