When we at VisualARQ present projects done in Rhino, we search for 2D or 3D architectural models which embrace life: homes, offices and factories. Occasionally, hospitals, cultural centers, schools or sports centers. Architects are usually given assignments for designs which host fervent human activities and must take into account the activity and flow of people, the communication network, how they fit with the environment and how you access to them. Life in motion. There are other types of buildings that, in many cases, we inherited from the past and that we usually just expand, restore or relocate: places of worship and cemeteries. Typically, both cities and villages have churches, chapels and cathedrals which were erected centuries ago. In addition to their religious function, they also attract travelers, since they act as cultural focuses and as museums, exhibiting the art of the past through the building itself and its decorations. As for cemeteries, some centuries ago they were placed outside the inhabited settlements and, since our relationship with death is radically different from the past, they are rather something that we prefer to forget and “not to see”. How do architects face a project that the community prefers “not to see” but, at the same time, is a departure station to which we turn to overwhelmed by emotions? Today we are visiting the “Chapel of Rest”, built by Hofrichter-Ritter Architects in Graz (Austria), a city that, at the beginning of 2014, had 272.000 inhabitants. 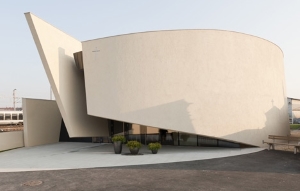 The Steinfeld cemetery used to be on the outskirts of the city, close to the railway tracks. After the construction of a pedestrian tunnel, the area was no longer a regular transit zone and ran the risk of degrading. In this context, the construction of a chapel adjacent to the cemetery should transcend its religious use and transform the surroundings into a public park, while serving its main purposes: receiving the coffins, funeral services and departure point towards the cemetery and the columbarium. Hofrichter-Ritter’s choice has been a chapel wrapped by a wall of two curving concrete formwork elements that not only isolates it from the outside environment, but also acts as a protective shield for contemplation. The wall is not closed but resembles the two valves of a seashell or two hands. The authors refers to this Bible verse: “Father, into thy hands I commend my spirit” (Luke, 23:46). This is the motto that inspires the peace that this place instills. The opening between the two parts of the wall conceals the exit to the cemetery and the columbarium and hides the view of the graves. The chapel is located inside the “receptive hands”. The architectural elements that indicate that this is the most important symbolic element are its central location, its size and its height.

The chapel has a size of 150 m² and can accommodate approximately 100 people, depending on the distribution of the seats. Its capacity can be extended if the glass access to the open forecourt is opened. The ceremonies take place in a peaceful environment, which is enhanced by the design. The height of the ceiling (about 5 m) increases the feeling of spaciousness and the diffuse dim lights, along with the soft materials, contribute to create a calm atmosphere. The chapel has a multimedia equipment that allows for custom farewell ceremonies and can also be used in cultural events. Outside the chapel, we find the ancillary rooms for funeral preparations and administrative services. They occupy about 120 m² and are surrounded by an outer wall with a double function: it acts as a barrier to the railway tracks and it defines the green area where the columbarium is located. This outer wall slants towards the building or away from it, depending on the function of each section. 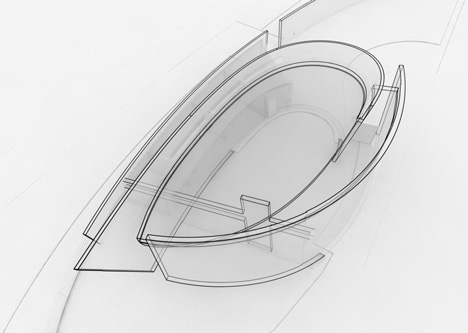 The design of curved walls, similar to those around the chapel, can be easily done with VisualARQ in two different ways. For those curved walls that are completely vertical, you could use the “vaWall > FromCurves” command, which allows you to convert an arc or 2D curve into a 3D wall. For curved and leaning walls or for those having an irregular section or thickness, you could use the command “vaWallFromSolid”, since it allows you to convert any geometry generated in Rhino into a valid VisualARQ wall. Architecture at the service of meditation, protection and peace between the hands that hold the “Chapel of Rest”. #architectural design software, #Rhinoceros, #hofricther-ritter, #Chapel of rest, #3D Studio max, #VisualARQ (Article by M.A. Núñez)