The success of an architectonic parasite in a prehistoric legacy

When we think about the use of architectural programs such as Rhino, Norman Foster or Zaha Hadid works come into our minds. However, Rhino goes beyond huge projects, NURBS or parametric complexity. In this blog, we want to look to broader horizons. When architects or engineers try to compare the best programs for their work, they opt for Rhino if they need free-form design, accurate modeling, complex curves, etc. However, this software offers many other possibilities. If, in addition, we add to it a tool like VisualARQ, technology will be at the service of creativity, not the other way round. For projects of any size. 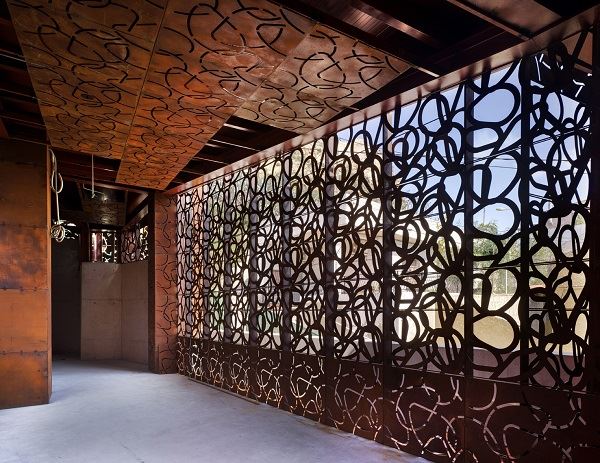 VisualARQ, a free-form architectural software, analyzes the design of the Monteagudo Museum.
Image by David Frutos

Back to the beginning. Large buildings? Projects with brilliant and evocative titles? Not necessarily. 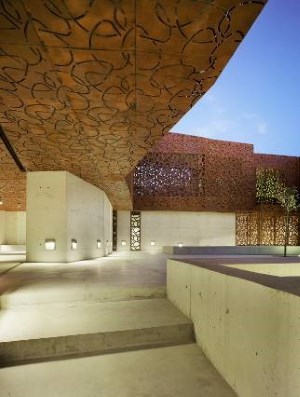 There are alternative options: the Madrid based Amann, Cánovas and Maruri studio, for example, speaks of its Monteagudo Museum Visitor Center project with these words: “This building is, without doubt, a parasite.” A parasite in the best sense, that of mimesis and adaptation. A fruitful exchange of energy. Monteagudo is a small town in the province of Murcia, Spain. It was not difficult to choose the best location for a new museum: they simply had to go with the flow of local history. A nearby hill is the physical representation of the town’s history.Thanks to its privileged position, it was chosen as a settlement by the inhabitants of this region from prehistoric times! There are the remains of an argaric village from the Bronze Age dated 2000 years BC, an Iberian settlement from the IV century BC, a Roman site from the 1st century AD, an Arab village, a Christian chapel, as well as the remains of a castle from the year 1000. 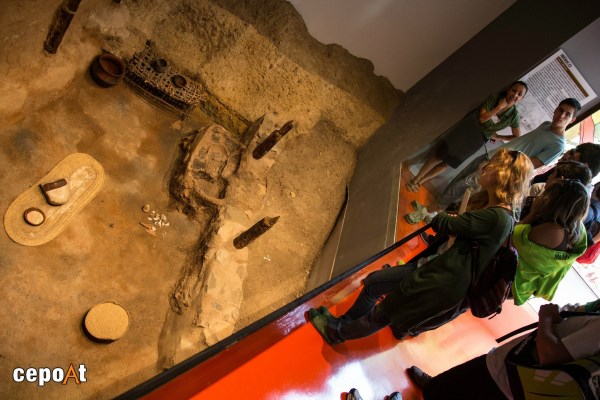 Archaeological remains integrated in the new building. Image by www.monteagudo.info

Imagine for a moment that they are architects and are commissioned to create a work that, over time, will leave its trail with these illustrious precedents. Real History. The lucky ones were Atxu Amann, Andrés Cánovas and Nicolás Maruri, who employed Rhino software. The Visitor Center is just where the prehistoric and Roman settlements existed. On the one hand, the Center had to preserve the remains and allow its study. On the other hand, it had to adhere to the skin of the mountain crowned by a castle and a chapel and coexist with them. When spotted from the mountain top or from the towers of the castle, the museum should look as just one more relief. 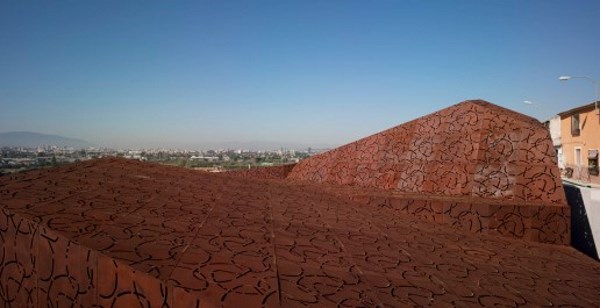 The terrain orography affects any construction. In this case, since it is a building that will receive visits, they have opted for ramps. Double advantage: they facilitate the access for all types of visitors and, at the same time, let the building fit into the environment. The construction has a “U” shape, and leaves a baroque chapel in its center.

The design of this modern building leaves a baroque chapel in its center. Image by David Frutos

What about the cladding? This parasite has metal skin, fully covered with a plant-like design inspired by the natural surroundings.

Metal coating is inspired by the forms of the surrounding nature. Image by David Frutos and Zeisterre

The ground floor has been designed as an open space, a temporary refuge. The designers have created an urban building that is open to the neighbors and acts as a shelter in the shade under the burning sun of Murcia. Its walls are of concrete, with movable metal panels. 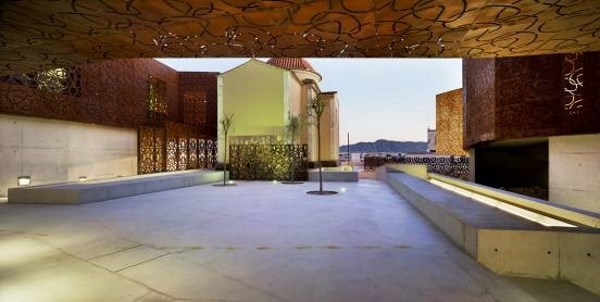 The building entrance integrates into the urban fabric. Image by David Frutos

The temporary exhibitions are on the upper floor rooms. Through their windows, you can contemplate nature and the castle. A multiple sheets panel, sealed with a hot waterproofing process, forms its metallic structure. The shell of this peculiar parasite is coated with corten steel perforated with patterns that remind of the vegetation. Through them, the light is filtered inside the building.

Access to the temporary exhibitions area of the Museum. Image by David Frutos

The steel trusses are clearly contemporary because of their material, but also remind us of Arab latticework. The sheet of water in the interior takes our imagination to those typical in ancient Arabic architecture.

Parallelism between the use of water in contemporary architecture and in the traditional Arabic one. Image by David Frutos and Zeisterre

More than 700 years ago, through some Arab wood or stone latticework, one could contemplate this hill. Today, centuries later, through another metal lattice, we can glimpse the same landscape. Besides, this museum allows us to approach the ancient sites and see the remains of our ancestors’ lifestyle. On this hill of Murcia, we become aware that we are not the first ones. Let’s hope that neither the last ones. The Monteagudo Museum Visitor Center will be our footprint. 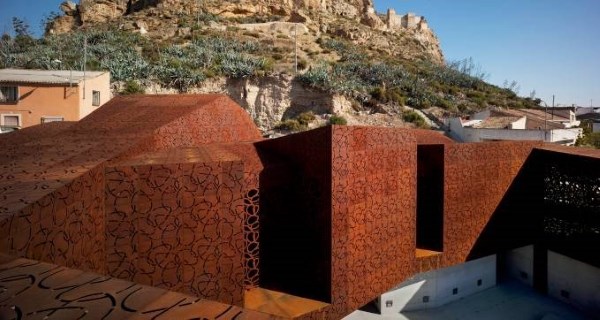 The remains of the Monteagudo castle can be seen from the Museum. Image by David Frutos