The Rhino and VisualARQ Video Tutorial

This video tutorial guide covers the full process of creating a project of architecture in 3D, from an empty document to the drawing production. The model selected for this tutorial is Le Corbusier’s masterpiece “The Villa Savoye”.

This tutorial is meant as a step-by-step guide to explain the architecture modeling workflow with VisualARQ and Rhino, but also to be taken randomly at any specific part and learn about the different VisualARQ commands and features.

General things to know about VisualARQ objects and commands: 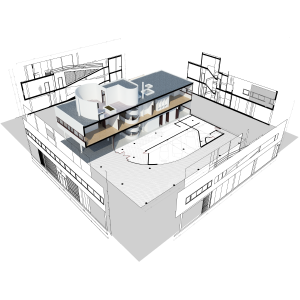