When I open a new drawing, VisualARQ toolbars don’t appear on the screen… How can I load them?

You can manually load toolbars when they are not automatically displayed after selecting a VisualARQ template by using the same method to load Rhino toolbars: Type Toolbar on the command line and open the VisualARQ toolbar file (VisualARQ.rui), which is located in one of the following directories, depending on the Rhino version you are using: Next time you open Rhino, VisualARQ toolbars should appear on the screen as you had them when you closed your last Rhino session. If VisualARQ toolbars still don’t appear, VisualARQ might be trying to load an old toolbar file. In that case, you might need to manually delete the “visualarq.rui” toolbar files (from the directories mentioned above), uninstall VisualARQ and reinstall it. 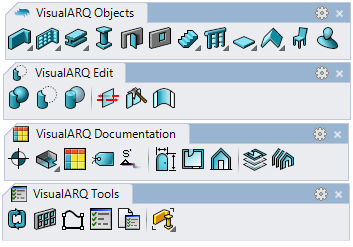 More Check out this article from McNeel to learn more about toolbar behavior in Rhino.